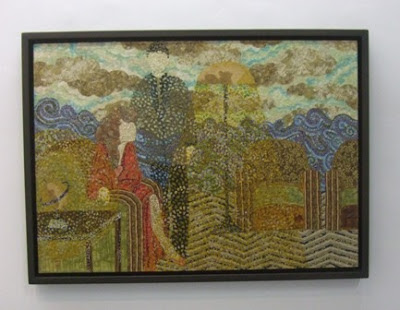 Who has not heard of the French Folie Bergere? Taipei-based French artist Jacques Camille Picoux saw the spectacular and dazzling world of the Paris revue up close years ago through the eyes of his dancer grand aunt.

During her time at the start of the 20th century, Diane Belli was the star showgirl at the famous Paris music-hall patronized by the haut noblesse. She seduced a long line of rich and famous clients who came to be entertained. French author and painter Jean Cocteau was just one of them.

As a young boy, Picoux could not help becoming awe-struck over his grand aunt’s accounts of her days of glory with the Folie Bergere. She fired his imagination further by giving him souvenirs from the peak period in her career.

Picoux has kept and cherished to this day a picture showing her dressed in contour-revealing tights while being raised high with two hands by her male dance partner. She also gave him for keepsake a photo reproduction of herself with cigarette almost dropping from one side of her lips while affecting the posture of a worldly French courtesan. 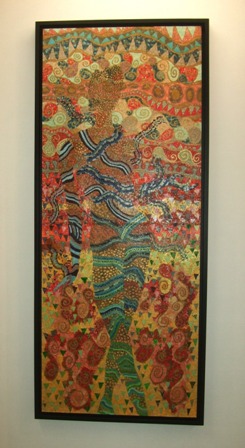 The Folie Bergere, a symbol of Parisian life and French pleasure, fascinated Picoux in his youth. The magic stardust which Diane Belli sprinkled on him went on to influence him in his creation of works of art over the years. He, in fact, “painted” with flair and elegance many a collage to remind all somewhat of the French Belle Epoque.

Picoux embarked on flights of fancy revolving around the men and women or even feline pets in his private life in his collage and mosaic art, choosing to work ecstatically with colored paper bits, fabric remnants and glass pieces. He also was playfully creative with socks and ties, arriving each time at a beautiful kaleidoscope of color for everyone to admire. His fondness for Art Deco motif and style was clear to see. Dots, wavy lines and geometric patterns were cleverly introduced at whim.

Jacques C. Picoux’s last one-man show which was at the Pema Lamo Gallery in Taipei this year made possible for many a revisit of his years of creativity from 1979 to 2012. The 63-year-old artist likes to draw. But he is convinced that his restless hands are better at other creative explorations like collage and mosaic art creation or even needlework such as embroidery.

Picoux comes up first with a design in his creative process, then buckles down to patiently pasting colored paper over it. A change of heart simply requires the introduction of a new layer of paper. The story is different when he is working with fabrics. Unstitching a finished work is never easy, he reveals.

Colored glass becomes his preoccupation sometimes. He spends months working on just one mosaic mural. Such painstakingly detailed exercise is reserved only for very special individuals. He takes pride in showing off to friends his success in transforming his entire bathroom at his Taipei home into a mosaic masterpiece.

His extraordinary paper supply is usually sourced in Japan, says Picoux. He combs the flea markets in Paris or elsewhere for textiles and fabrics. Beaded or sequined antique finds he collects for eventual recycling as art materials. He not only enjoys doing needlework like embroidery but also sometimes dabbles in fashion design.

The mannequins of Picoux’s art world are perhaps a revelation of his fascination with his showgirl grand aunt and the Folie Bergere of a glorious era. Collage talent Picoux dresses them in uniquely colorful and even glittering style. He amazes with his flair for intricate details.

Two of the collage works on view at his last show in Taipei were reproduced as signed prints in limited edition for potential collectors. Also part of the exhibit was a furniture set of table and chairs all covered with the collage art of Picoux.

Hanging on one wall of the gallery in Taipei were framed items from the artist’s souvenir collection. They included pictures of his grand aunt, thereby opening a window on the private world of Picoux. A doodle from director Tim Burton and a gossip news clipping showing Picoux with actress Gong Li were proofs of a life with never a dull moment. Photos of Picoux posing as a respectable tea connoisseur visiting a tea plantation in Yunnan in a commercial made last year under the direction of Hou Hsiao-hsien went also on display in June and July.

Picoux originally came to Taiwan to professionally teach the French language at the National Taiwan University years ago. He taught until his full retirement not too long ago. In the early years of his stay in Taipei, he even collaborated with the late Francoise Zylberberg and Maria Chiu in producing the extremely successful French language teaching program for the Chinese Television Service (CTS) called “Salut les Copains.”

Being French, he feels pride in his own culture. And so in addition to teaching his mother tongue, he shares glimpses of his world, including his passion for the arts like music, theater and film as well as his taste for exquisite French cuisine. He loves to cook French dishes for his friends at home.

Having found a second home in Taiwan, he soaks up the local culture, too. Picoux is very interested in Taiwan cinema. In fact, he was the translator behind the French subtitles of films directed by award-winning filmmakers Hou Hsiao-hsien and Edward Yang, which made a great impact at the Cannes International Film Festival over the years. 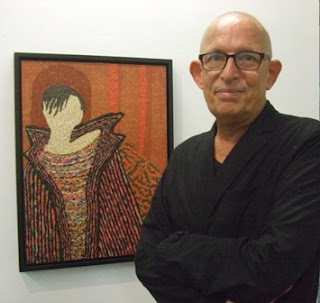 The solo exhibition of Jacques C. Picoux at the Pema Lamo Gallery in Taipei opened on June 16 this year and closed on French Bastille Day, July 14. The gallery (tel. 02-2700-0133) is located at 26, Lane 304, Chienkuo South Road, Sec. 1, Taipei. The place is easily reached from the Xinyi Road intersection.